Exploring the empty country of Los Medanos May 24, 2006

"I built a Rail bicycle and pedaled from Monahans to Kermit. It took me a while to figure out how to build it, but it worked, by golly. Bill Loos, the General Manager of the Odessa Ector Power Partner Power Plant, constructs things for fun. He also has built a solar collector that automatically follows the sun. He once collected antique engines (as a study in the development of the construction of engines.)

We barreled along on a foggy May morning, headed to Los Medanos, the red sand dunes of Lea County, just east of the San Simon Sink. Almost every weekend he takes a quick daytrip to the region. "It is empty country – I almost never see anybody."

The jeep jolted along a gravel road near a cell tower. Bill goes full-tilt in his every action. After we parked the jeep we walked four miles in three hours. He is a strong walker, charging along seeking challenges. We struggled up the steepest dunes, and then plunged down even steeper slopes. He waded through the cascading sand with triumphant steps, chortling with glee at the mini-avalanches in his wake.

"It is a checkerboard out here. The Bureau of Land Management owns some of the land, as does the state of New Mexico, and on top of that, there are private holdings scattered about. Fences are not permanent in shifting sand, so it is possible to trespass on private land without realizing it. I have only been stopped by a landowner once, but we hit it off, and he let me continue walking on his land."

Bill has posted a number of interesting photographs to the Sibley Nature Center website image gallery. I had told him when we set up the trip, "I can you get down on your belly in the sand, for you notice instances of incredible detail." In fact, Sibley Nature Center board of directors became aware of him because of the photographs, and invited him to become a board director! One of the artifacts that Bill finds with ease is fulgurites.

Fulgurites occur when lighting strikes the sand, fusing it into a ceramics that withstands the howling winds of saltation (35mph wind makes sand grains bounce along, and when they do they abrade objects, stripping paint from metal, for example.) Several times during our walk he bent over to pluck another fulgurite to show me. I had never before seen them in the dunes! (And I thought I was a reasonably observant fellow.)

His father was a teacher and principal in Carlsbad, New Mexico. His mother loved to take the kids to the countryside so she could spend time drawing and enjoying the beauties of nature. Their joy of pursuits that enliven the mind influenced him greatly. I enjoy folks with an active mind. Bill's boundless energy is a reflection of his always questioning, always analyzing, and always curious mind. 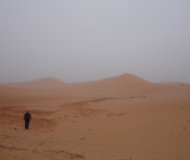 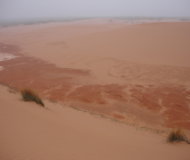 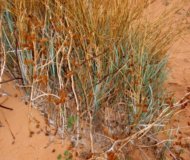 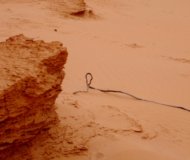 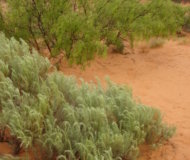 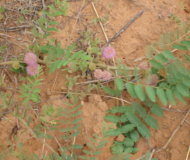 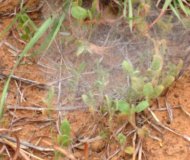 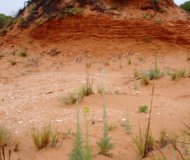 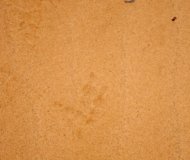 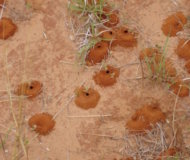 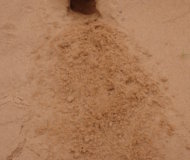 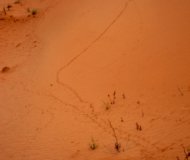 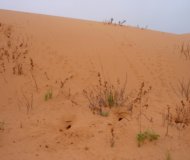 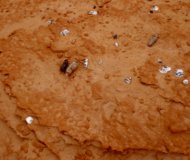 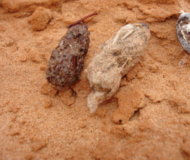 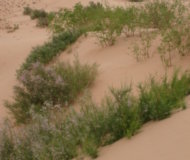 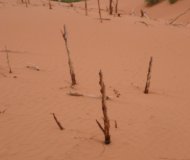 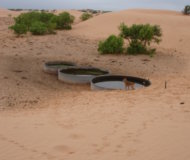 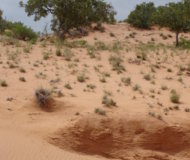 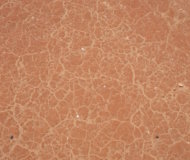 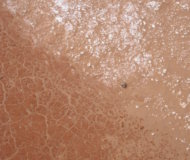 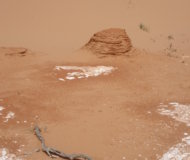 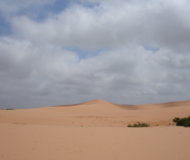 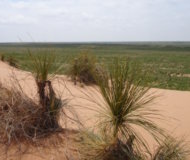 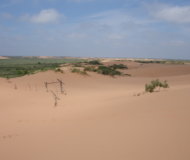 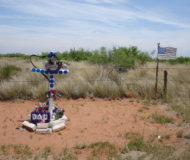 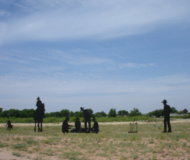 The region where we walked used to be part of Clabe Merchant's San Simon Ranch. The depression to the west was named for the ranch. In a Lea County historical association publication I found the following; "Fruit trees bloom much earlier in the sink." The sink is a depression of 75+ square miles, and the almost flat bottom appeared to cover as much as 10 square miles.

Bill I stopped at a windmill that might have been 75 to 100 years old. "We are on the old boy's property that stopped me," he told me. I loved the location. We found a seedling cottonwood, several groves of living black willow, a ghost grove of willow, and a smattering of salt cedars. I was surprised at the ability of the salt cedar to survive in the shifting sands – most woody plants die if soil covers much of the trunk.

I wondered if it dated to the days of the San Simon Ranch. What would it had been like for the folks that drilled the well? How much of a struggle would it have been to haul the machinery across the dunes? The windmill no longer worked, however, but water was still being pumped. Solar powered pumps have become much more common in remote locations.

I made Bill take a break. He knelt, and I sat. Scissortails came to the windmill after we had been motionless a few minutes. Bill's heeler dog Ginger watched two cows lick at a mineral block just beyond the three stock tanks of water. A killdeer swooped by – if we had not been there he would have landed and prodded and probed in the cow plop stained ground near the tanks, but he zipped over the nearest dune and disappeared. Two ravens that had wandered near us off and on all morning also came to check on our actions, probably scoping out to see if we were leaving any food-bearing trash. We had seen very little trash as we walked.

As we sat at the windmill the sky changed from the amorphous gray fog to rapidly scudding puffball clouds. By the time we returned to the jeep to head home the sun became the dominant feature of the sky, as normal. We found several mysteries as we walked. On one hardened outcropping of hardpan soil between a dozen splotches of bird droppings we found what appeared to be droppings of a predatory animal, and I had guessed it was the scat of a fox. On our way back, we found burrowing owls utilizing what must have originally been kangaroo rat burrows, and so decided that the scat was actually owl pellets.

In another location over 500 small holes surrounded by piles of dirt were found around one mesquite tree. No other mesquite within 100 feet had the holes. "Colonial bees?" I guessed. I was fascinated by the hardpan between some of the dunes. Much of it was red, like the sand, but in places there were thin white plates that could be pried up. "Is this calcium carbonates deposited after a big rain and then dried to form this," I asked. Bill pointed out that near the willow trees we had found gray hardpan that might have had more organic material, but we agreed that we were not sure of the answer. Taking a walk in the wild a person often finds mysteries unsolvable, and that is a very good thing, sometimes. It enhances the awe that a person can feel. "I love the dunes," Bill said, "their shapes and lines and textures are so --" and I butted in, "sensual!" He laughed and qualified my term. "Well, aesthetically."