From dinosaurs to cattle-baron times January 31, 2006

"We ought to buy a buffalo!" I nudged Rick Day, as we stood next to a corral with six buffalo on the Mott Creek Ranch in Motley County near Matador. Ranch owner Marisue Potts was listening."Could we work out a deal with you – you could use it to work your horses for competition while it is young. We would pay for its feed." She nodded, but the look on her face was questioning – would we really do it?

"There would be such a wealth of educational possibilities." Rick's eyes were alight with the possibilities – he is an impassioned man who operates with a hyper-metabolism. (The hyper-metabolism is inherited. The day before Rick's father had joined us. At 70, he walked more than the rest of us. He is a wood craftsman of note, selling his products nationwide.) Rick never stops moving, and never stops thinking. Rick is an eighth grade science teacher in Andrews and takes his students for a three-day archaeological dig not far from where we were standing. He organizes adult digs at the site, as well.

The site is fascinating. Located on a bluff above a willow and cottonwood filled creekbed just a few miles east of the Caprock Escarpment, it is surrounded by juniper covered hills. Narrow little side canyons boast dripping springs, beautiful pools, and creeks that trickle all winter. The ranch also preserves post-settlement history – with a stone-walled dugout with a chimney still erect, a fence built by pastores before the Anglo ranchers took over, and pecans and crabapples planted 100 years ago. Rick has also found dinosaur and Pleistocene-era bones on the ranch, as well.


Marisue is an avid historian – when we left, she gave me a copy of her book "Motley County Roundup, over one hundred years of Gathering." Her ranch is part of the old Matador – a legend in West Texas ranching history. As many ranchers have discovered, folks interested in history and nature want to visit. She has a three-bedroom B&B, and will give tours of the ranch. Check out her website – www.mottcreek.com.

Richard Galle, another companion, gathered the three of us together for a picture. It was "getting to be time to go." Richard, a long time non-profit executive director in Plainview, Lubbock, and Midland, introduced me to Rick because he knew Rick would loan the Sibley Nature Center a phytosaur skull that he and his students had reconstructed. Raised in Floydada, Rick had spent his childhood roaming the pastures of the breaks of the headwaters of the Pease River and Llano Estacado and had become an avid searcher of arrowheads. As he grew up, he became fascinated with all "found" history. The act of discovery in finding an artifact and then knowing how it fits into the past became his life's purpose.

After we posed, I came back to the subject at hand. "We could videotape and photograph and record the life of the buffalo. Then we could take some of the tools from the site and actually dress it out in the way the people did across the creek long ago." Rick shook his head – "No, I will make the tools, using what we find as templates – I don't want to damage the artifacts."

Marisue chimed in. "We could use the big cooking pit to cook it in." She pointed down the valley in its general direction. 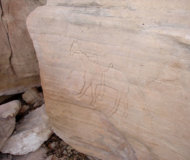 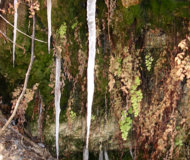 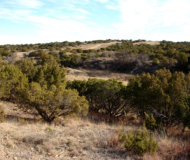 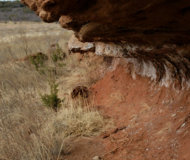 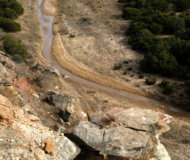 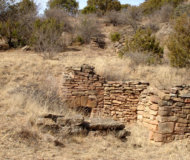 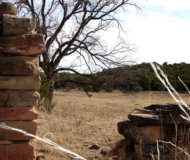 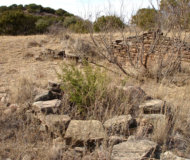 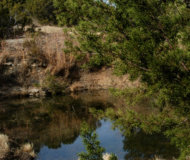 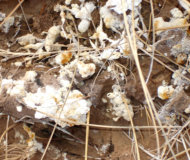 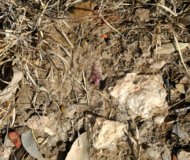 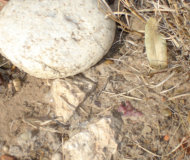 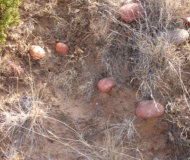 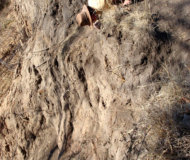 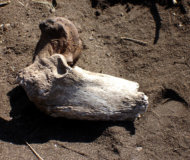 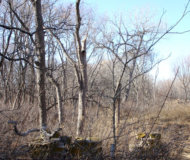 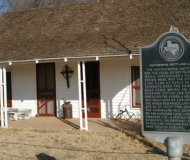 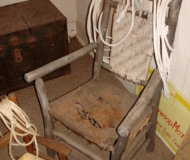 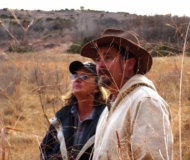 The day before, as we had explored the ranch on a chilly 18 degree morning, I had listened to the chatter from Rick and Marisue about their discoveries and asked, "So you are saying these folks were proto-Jumanos." Marisue had turned to me with a delightful smile – and had emphatically and excitedly exclaimed, "Yes!" Related peoples lived from San Angelo to La Junta de los Rios (Presidio), to near the Manzano Mountains east of Alburquerque. The Concho Jumanos saw the blue nun in the 1600's– one of the wonderful supernatural stories of the region. (Go to our website sibleynaturecenter.org, and read another essay about her! There are other essays about Jumanos, as well – just type Jumano in the search engine, and you will find more.)

Before Rick, Richard, and I left, we went over to Marisue's house, so she and Rick could do a little planning for the visit of the students. On the next Tuesday Rick was giving a town-hall meeting in Andrews about the trip, and wanted to show off some of the artifacts – such as a buffalo scapula used as a shovel. Marisue scans the artifacts in color, and keeps everything neatly organized. They do their best to do the work as procedurally correct as possible The artifacts will someday will be returned to the site and reburied at the proper depths – something they want to do as a sign of honor and respect for the people who left them.

While they chatted, I watched turkeys in the open pasture below the house. At least 80 turkeys roost in the big trees between the house and buffalo kill site. In the morning the turkeys parade around, gobbling, and fussing. Earlier we had watched several pairs of males entwine their necks and wrestle. Merisue's little terrier dog seemed to be upset by such behavior and would go break up the tussles. Three deer grazed not far from the turkeys.

"It is a crying shame we gotta go." Richard joined me, leaning against Rick's vehicle. "I would love to stay here – this has been a great weekend!"