In a recent email with an attached photo and video, Mr. Jerry Thompson documented an interesting symbiotic relationship: phoresy. Phoresy, or phoresis, is a temporary, commensal relationship in which one organism (a phorant) attaches itself to another (a host) exclusively for the purpose of travel. Phoresy has been observed in mites since the 1700s, but evidence of the behavior has been captured in the fossil record from the Carboniferous period of about 320 Mya. Phoresy is not restricted to animals, but plants with seeds that disperse by attaching to animals (cocklebur, grass bur, and goat head) can also be considered as phoretic. Phoresy is a strategy for dispersal, seasonal migration, transport to a new host or habitat, escaping ephemeral conditions, reducing inbreeding, and achieving ecological diversity.

In the submitted visuals, the phorant is an arachnid---a pseudoscorpion, and the host a housefly. Pseudoscorpions (Order Pseudoscorpionida) are cosmopolitan, but due to their diminutive size, are seldom noticed. They are found in a variety of habitats including under stones, in leaf litter, in soil, under tree bark, in animal nests, and in houses. One species, Chelifer cancroides, is a commonly encountered species in homes, where they are often observed in rooms with dusty books. Pseudoscorpions are considered as beneficial since they feed on the larvae of clothes moths and carpet beetles, booklice, ants, dust mites, springtails, and small flies. Pseudoscorpions frequently hitchhike on larger-bodied flying insects.

Although resembling miniature scorpions in general appearance, pseudoscorpions lack an opisthoma (elongated abdomen) and telson (stinging appendage) found in true scorpions. However, pseudoscorpions do possess venom glands in their pedipalps (claws) which are used to capture and immobilize their tiny arthropod prey. Once captured, the exoskeleton of the prey is torn open by the pseudoscorpion’s pincer-like chelicerate mouthparts. Pseudoscorpions also secrete a mildly corrosive fluid over their prey to liquify the remains to be sucked out while feeding. There are also specialized glands in their chelicerae which are used to produce silk cocoons for mating, molting, or waiting out cold weather. The oldest fossil pseudoscorpion comes from the Devonian period of 380 Mya, and they have changed little since. 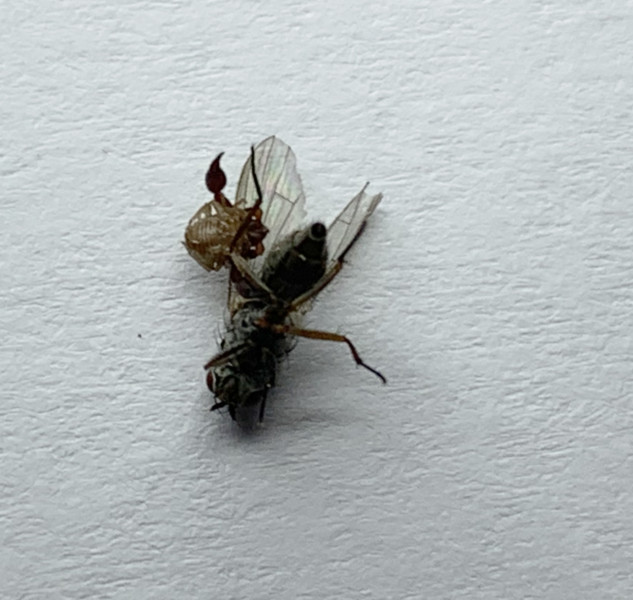