Documentation of the overwintering ovaries

Lotebush is a common shrub species found mixed in with mesquite bushes and tasajillo (christmas cholla cactus). When it blooms in May and June many species of insects come to nectar on the sticky waxy flowers (which are half the size of an adult human's pinkie fingernail.) After it blooms, the ovaries remain as discs until the following April and early May when blue berries appear, 11 months after insects pollinate the flowers. One other species of plant (a cactus known as Mammalaria vivipara or chilipitin cactus) on the Llano Estacado also displays this adaptation to the rainfall regime in the region (heaviest in May.) 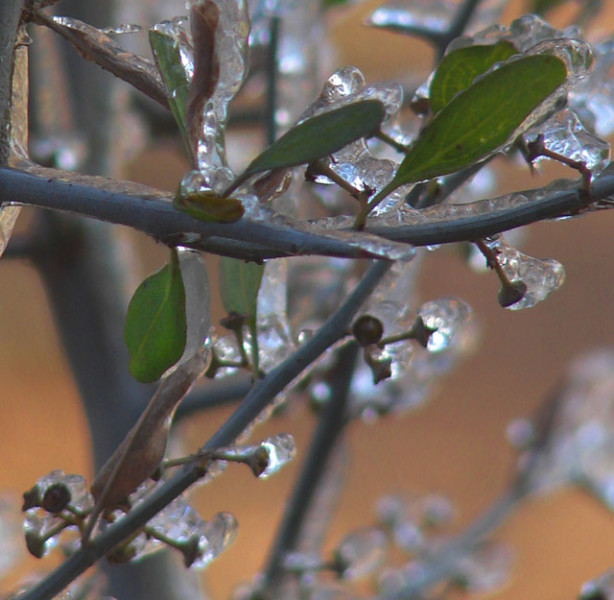 In November the lotebushes still have their leaves. 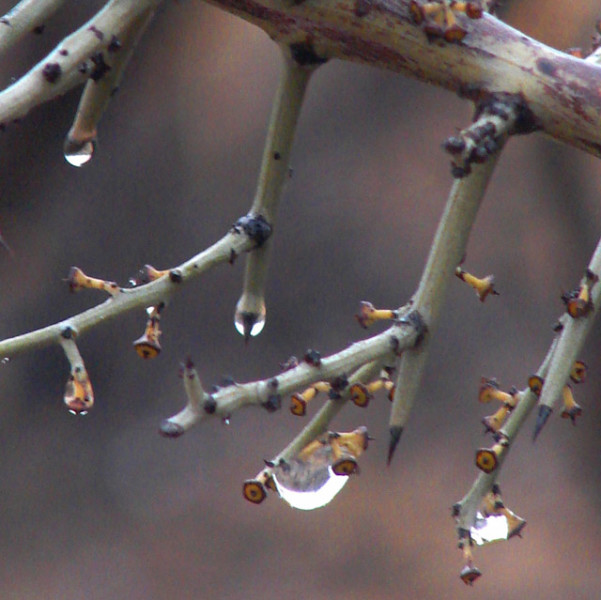 In December they are usually leafless. Notice the overwintering ovaries - they are yellow at this stage. Mist droplets adorn the plant. 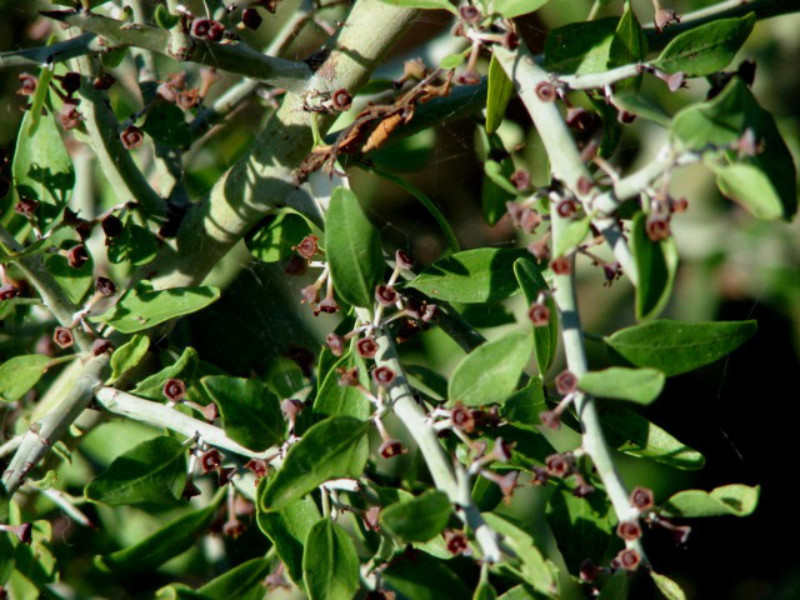 In late March the new leaves appear, and the overwintering ovaries have darkened. 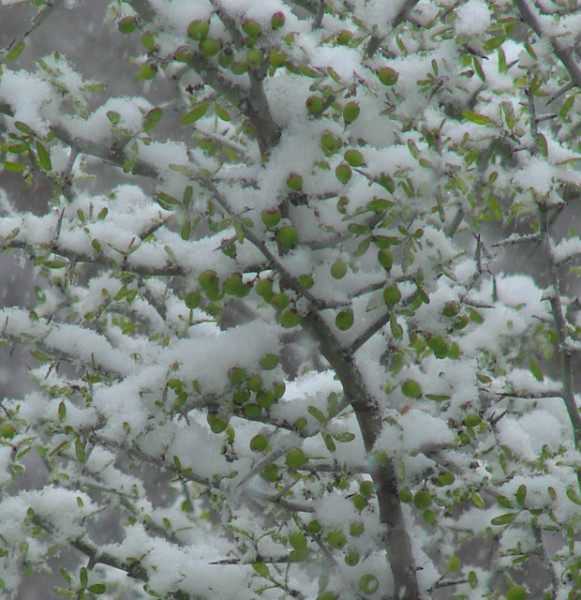 In 2007 the Easter snowstorm covered the fresh green berries. 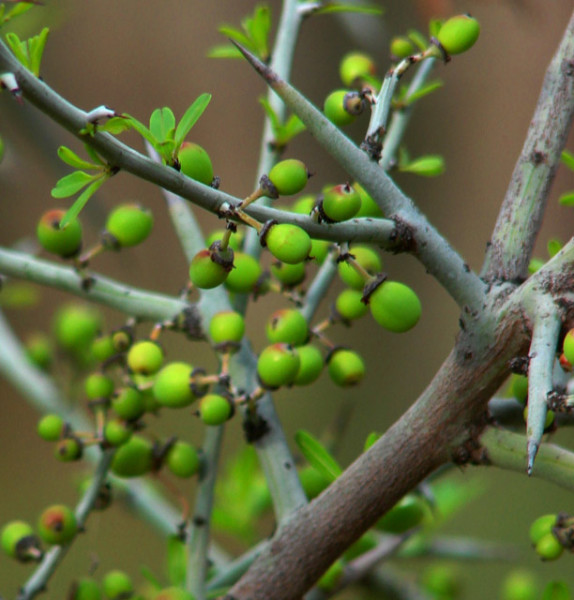 The green berries did not suffer from the late frost. 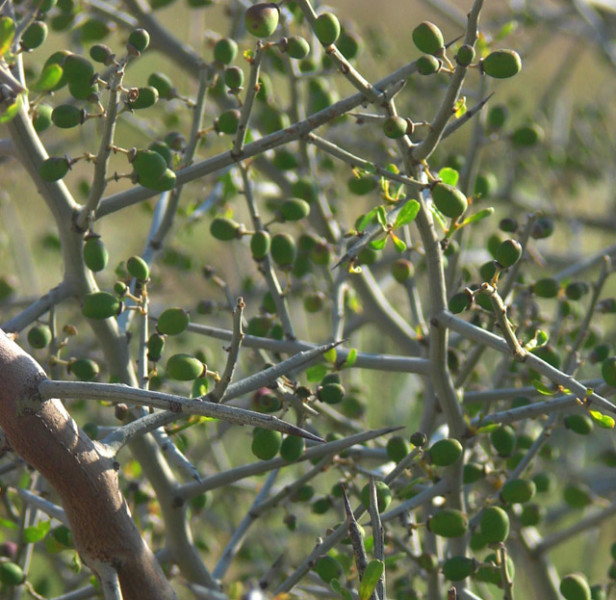 One of the berries is beginning to turn. With the plentiful rains of 2007 some of the lotebushes grew rapidly -- the twigs grew first without leaves, and then set leaves. 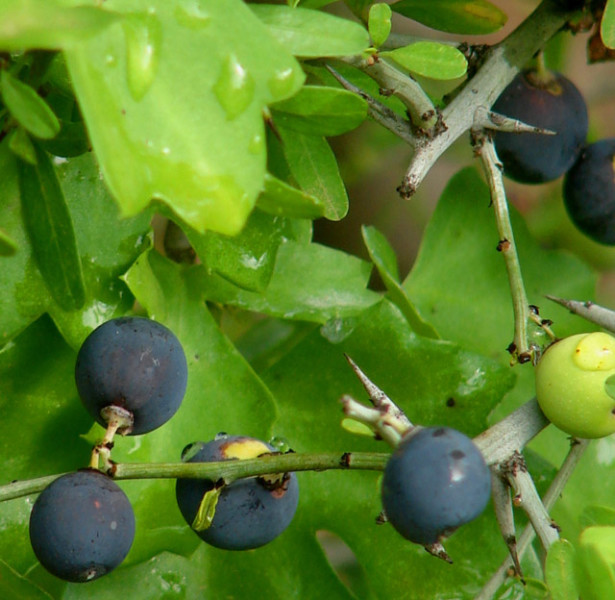 On one of these ripe berries in mid-May , some insect or bird has been testing its ripeness and peeled some of the skin off of the berry. A leaf of false grape (Cissus incisus) is nearby, dotted with rain droplets.

In late May the lote begins to bloom. 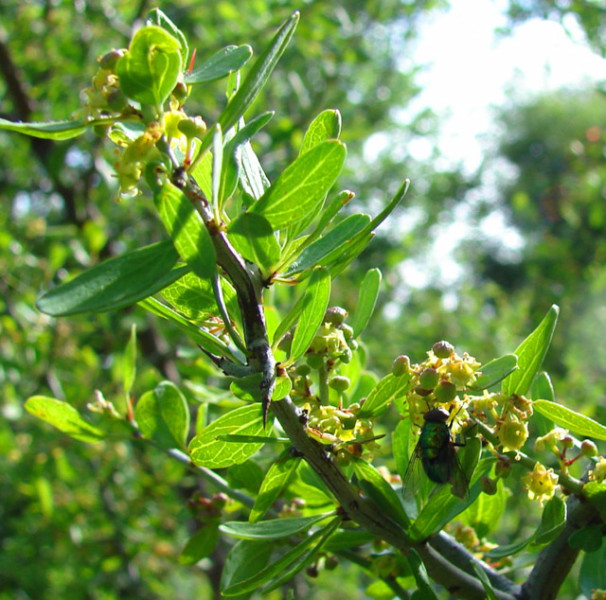 A greenbottle fly nectars on the plant -- these lay eggs on decaying flesh. 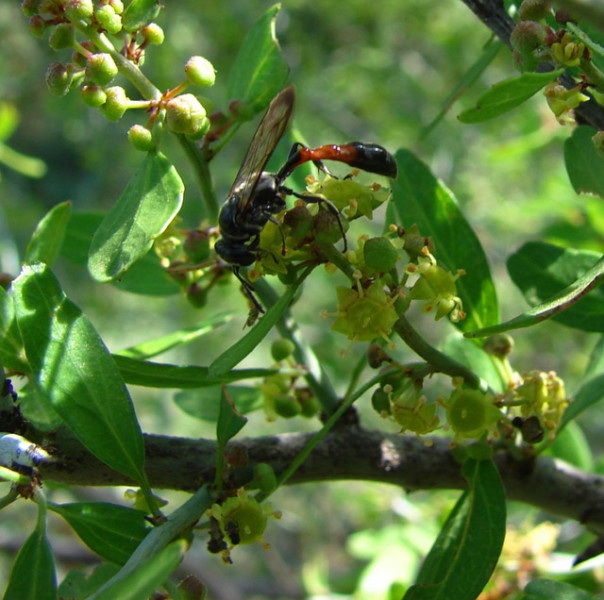 A thread-waisted wasp (with its waist bright red) found the sweet nectar. 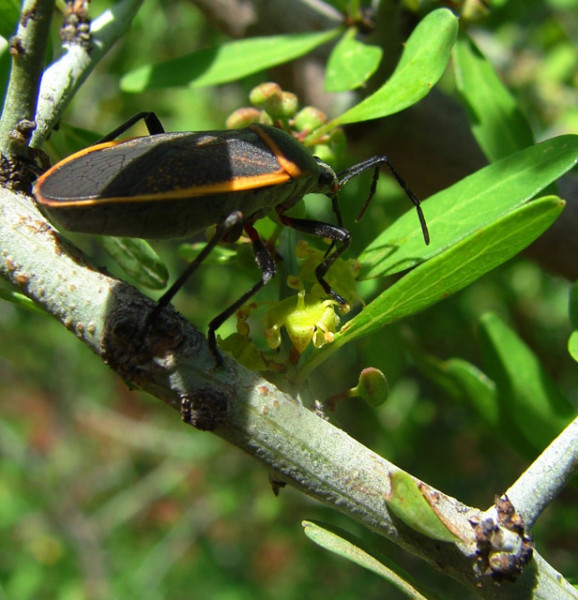 A shield beetle also nectared. Sibley staff are unsure if this is a predatory species, or a species that also punctures plant juices for sustenance. 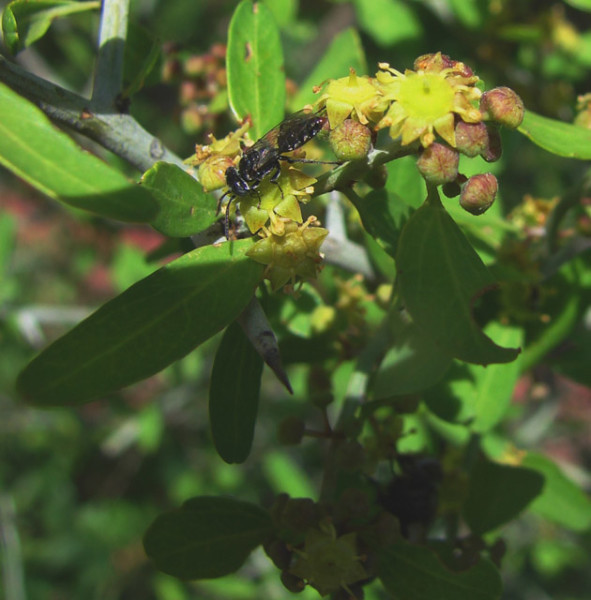 This small dark wasp is probably a species that lays eggs in caterpillars or insect eggs. It may take the Sibley staff years to accurately identify each pollinating insect on the plants of the region -- if ever! 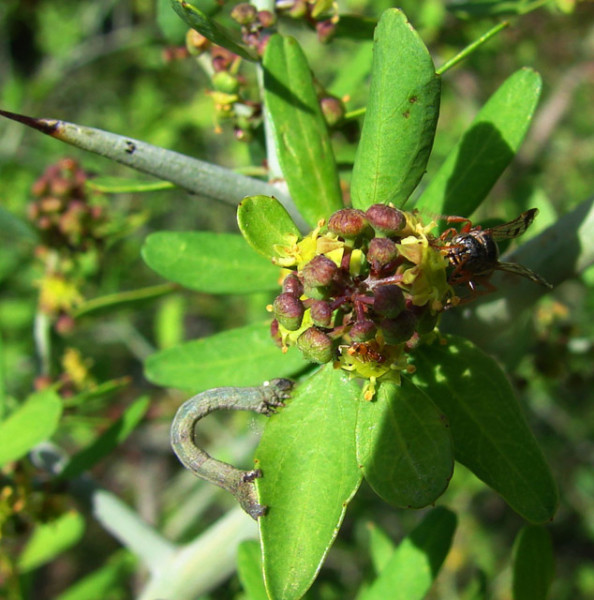 A small gray inchworm is ignored by a dark-faced wasp. Until the pollinator project began, we had not realized the variety among wasps of the region. 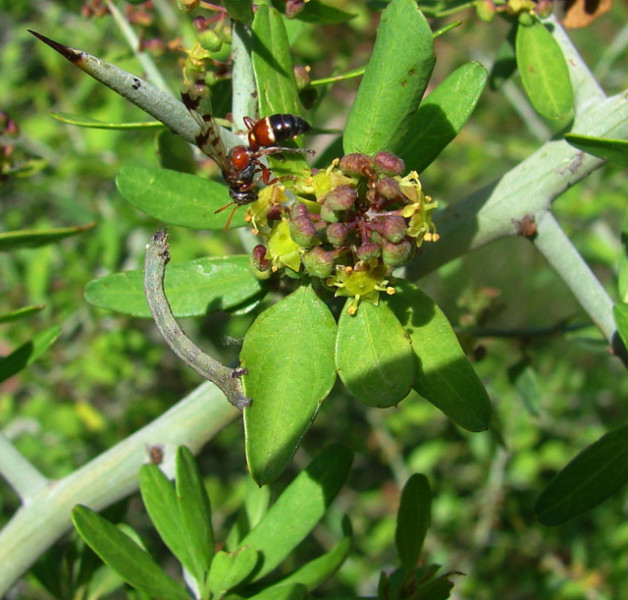 The inchworm froze, pretending to be a twig, when this red and black wasp appeared. Can inchworms distinguish between predators, parasites, and species that will leave them alone? 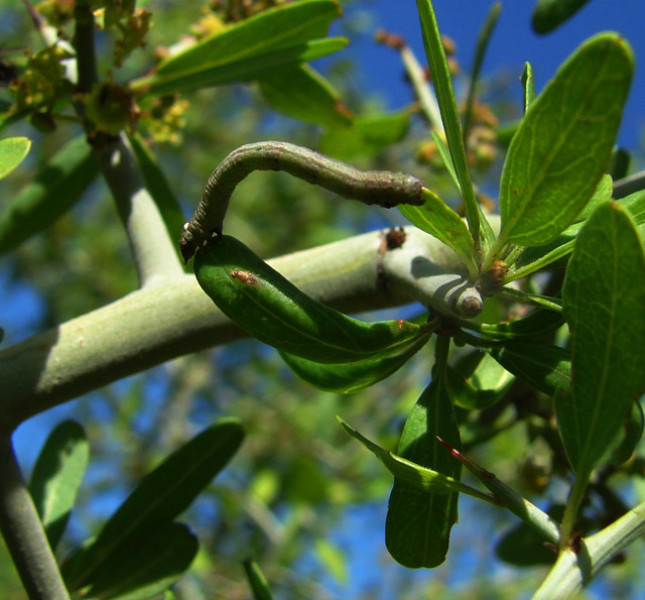 The inchworm moved about the lote rapidly, swinging from leaf to leaf like Tarzan. 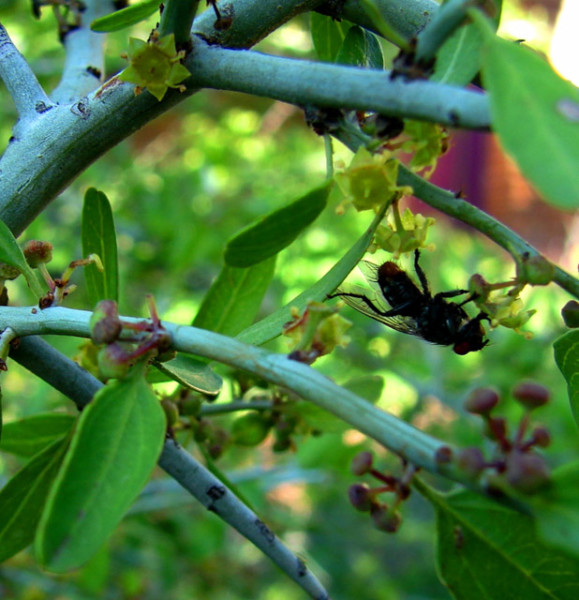 This large fly has a red abdomen. 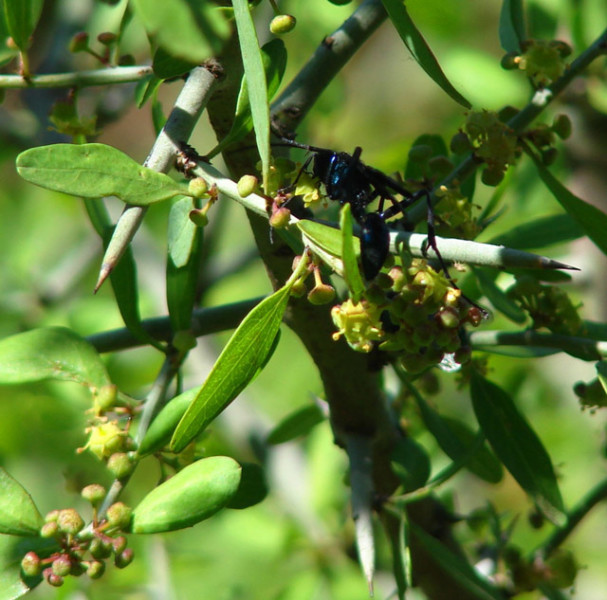 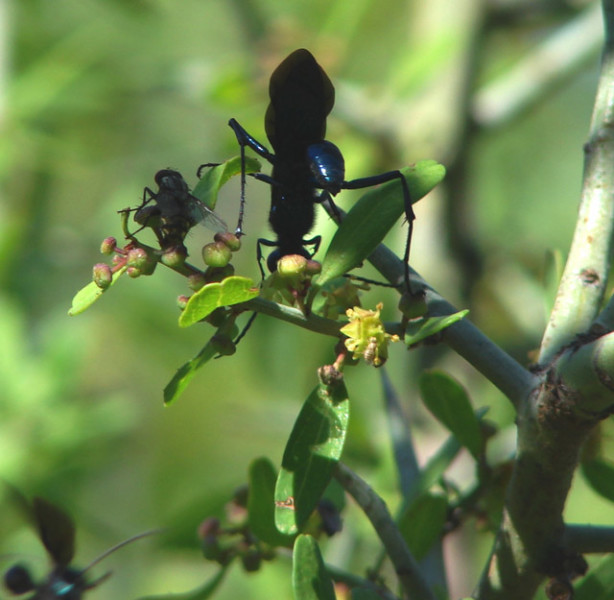 The cuckoo wasp ignored a tiny fly not much bigger than a lote bloom. 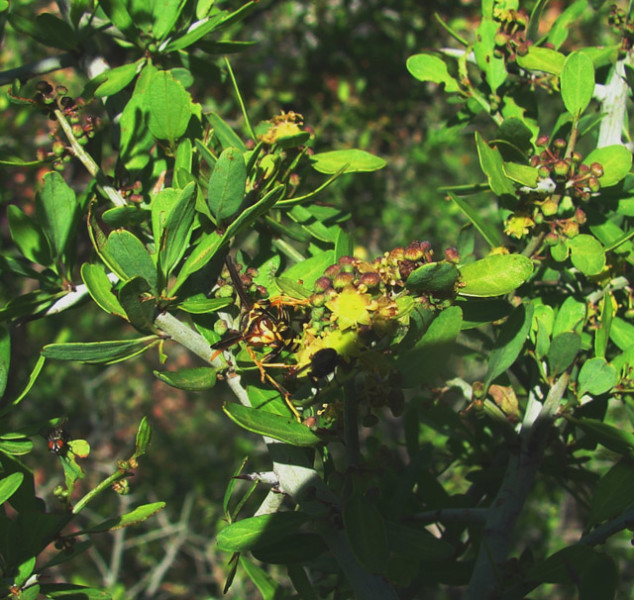 The common paper wasp species loves lote nectar - three or four were present the two hours the photographer sat next to the bush photographing the insects. 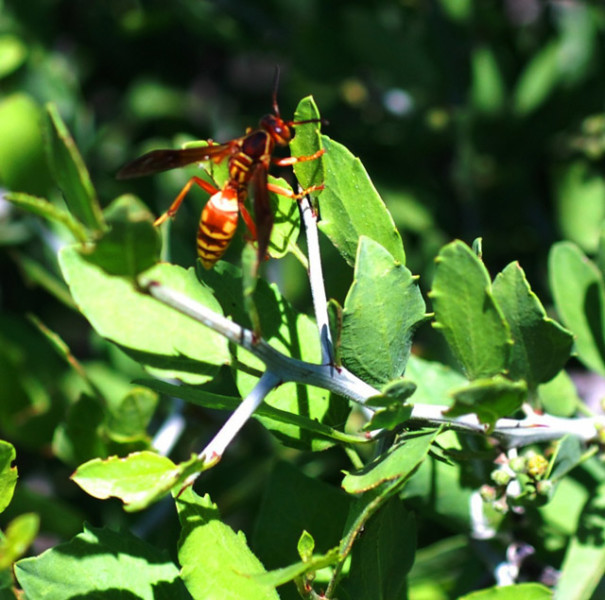 This red wasp is probably another species of paper wasp, but Sibley staff are not sure if it is of the same genus (Polistes). 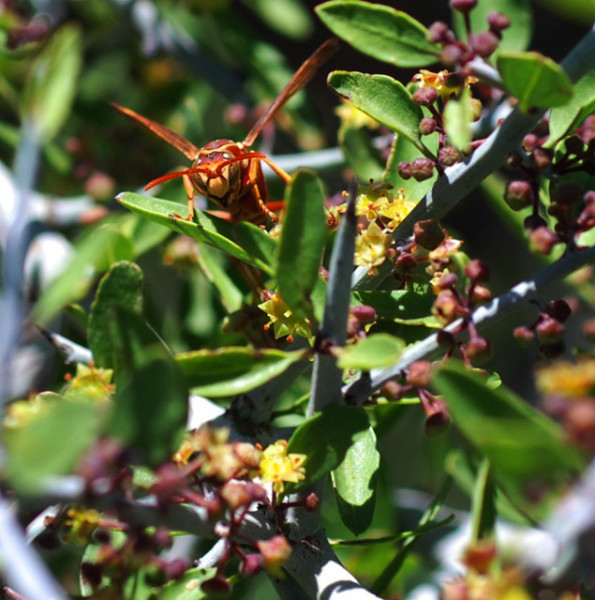 The face of the red wasp is attractive.