Galls (also known as cecidia) are growths on the external tissues of plants, fungi, or animals. Plant galls are abnormal growths similar to benign tumors in animals. The growth of plant galls can be induced by various parasites such as viruses, bacteria, fungi, other plants, insects, mites, and nematode worms. Plant galls are often highly organized structures with distinctive size, shape, color, and texture---so distinct that the gall-inducing agent can be identified without direct observation.

Plant gall-inducing insects include gall wasps, gall midges, gall flies, aphids, scale insects, psyllids, thrips, gall moths, and weevils. Insect-induced galls are produced as a plant’s response to a specific chemical stimulus received from the insect. Depending on the insect species, the stimulus is believed to occur either when the adult insect deposits an egg on a host plant, or after the egg hatches and the larva begins to feed. In either case, the chemical secretions from the insect interact with specific plant chemicals which result in the growth of abnormal plant tissue. The growth of a gall is limited in duration, and once formed, stops using the nutrients provided by the host plant.

Insect-induced galls are relatively harmless to the growth and development of most plants. The gall functions as habitat and nutrition source for the larvae of the gall-inducer. The interior of the gall is a rich source of starch as food for a developing larva. The gall also provides a physical barrier from potential predators. Timing and placement are also critical in gall formation. A gall-inducing insect must take advantage of a plant’s growing season---usually in the spring. Most galls grow in the meristematic regions of a plant, such as a bud, where most cell division occurs, but some galls can also be found on other plant parts like leaves, stems, roots, flowers, and fruit.

One of the most common galls in live oak trees in Texas (especially those that are planted as urban ornamentals) is the mealy oak gall, induced by a tiny wasp, Disholcaspis cinerosa (Family Cynipidae). Every year, D. cinerosa produces two generations of wasps, each with their own unique type of gall on live oaks.

The asexual generation produces the familiar spherical galls. It is the Disholcaspis larvae that are believed to secrete the chemicals to produce the spherical galls. From late summer to late fall, the Disholcaspis larvae feed within the galls. From August to mid-October, the internal gall tissue is moist and yellowish-green. In late October and November, the gall tissue turns brown and begins to dry. The larvae pupate in November. Adult Disholcaspis wasps emerge in December and early January by chewing exit holes in the galls. All the emerging Disholcaspis adults of the asexual generation are parthenogenic females which lay viable eggs without the need of mating with a male wasp. The newly emerged female wasps seek out live oak buds to deposit one and sometimes maybe two eggs. The female wasps may live 2-6 weeks during which time an individual may lay up to 20 viable eggs. Even though it is winter, there seems to be little effect of harsh weather on the egg-laying capabilities of most females. After all her eggs are deposited, the female wasp dies. The eggs will remain dormant within a leaf bud for the remainder of the winter. The recently abandoned galls weather during the winter, changing to a grey color and become dry and hard. They may, however, persist on a host tree for several years.

In the early spring, the winter-dormant eggs deposited in leaf buds hatch as the buds begin to open. The new larvae develop quickly in the new leaf growth, and in the process, induce the formation of a new type of obscure gall no larger than a grain of wheat in size and shape. The larvae pupate and complete their metamorphosis into adults within a few weeks. This is the sexual generation which produces both male and female wasps. The adults of the sexual generation are about 1/3 the size of the asexual adults. Immediately after emergence from the gall, male and female wasps then mate; the males then die. Mated females may live up to a week, each individual depositing about 15 eggs in the branches of a live oak. The eggs will go through a 3 to 5-month dormancy period, after which the larvae hatch and begin their development in the branch tissues that form the familiar spherical galls and completing the complicated annual life cycle of the Disholcaspis cinerosa wasp.

In addition to the Disholcaspis wasp and its parasites, there is an entire complex community of insects associated with the spherical galls of the asexual generation. The organization of this community varies with the stages of development of the gall.

From August to early October, several species of small wasps parasitize Disholcaspis larvae when the pink spherical galls first appear. Shortly after, a group of plant-feeding wasp inquilines (“guests”) lay their eggs in the developing mantle tissues of the gall. These larvae hatch and feed on the outer gall tissue without harming Disholcaspis. From September to December, many of these plant-feeding wasp guests transform into adults and emerging from the gall’s mantle: the remainder of their life cycle is poorly known. In addition, as the spherical gall develops, the gall tissue secretes sugar-rich exudates which accumulate on the gall’s outer surface. These secretions serve as a food source for many other types of insects including small flies, butterflies, honeybees, and large predatory wasps. These visitors will continue to feed until the galls begin to dry in the late fall.

From late October to early January, the mature spherical gall attracts a second group of parasitic wasp species attacking the mature larvae and pupae of Disholcaspis before the adults can emerge in December and early January. But after the emergence of adult Disholcaspis adults from non-parasitized galls, the vacated gall is immediately taken over by numerous beneficial arthropods including lacewing larvae, scavenger ants, small spiders, and small predatory wasps. Many of these species feed on insects considered to be pests of live oak trees.

After January, the dry, grey spherical galls mostly provide space for small ants. But some of the plant-feeding wasps in the mantle remain in gall tissue for some time. Some of the grey galls without Disholcaspis emergence holes still contain dormant parasites of the initial gall inducer. Some of these parasites will emerge the following spring to parasitize other insects. Others will not emerge until the following fall when they begin to parasitize the asexual generation of Disholcaspis (Frankie et al., 1978). 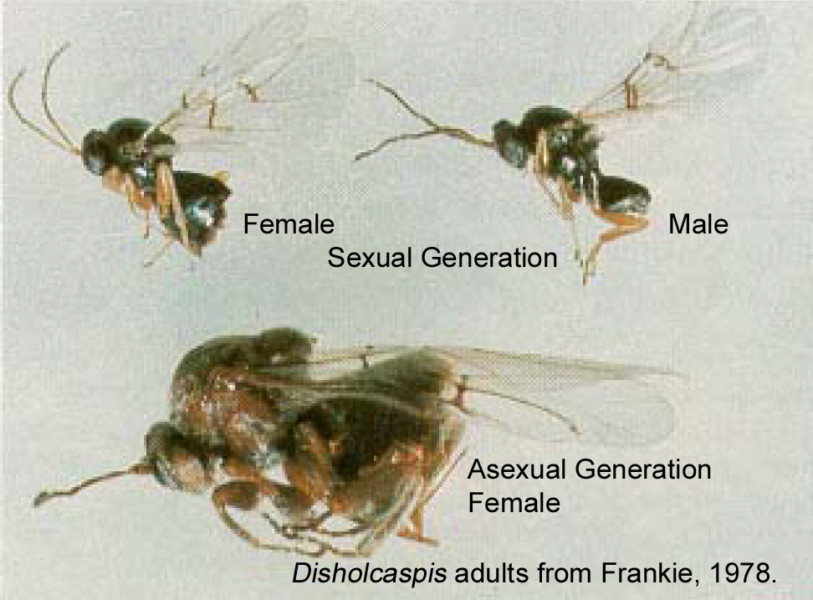 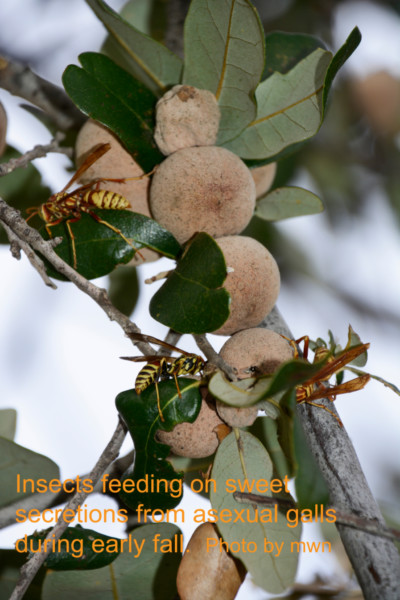 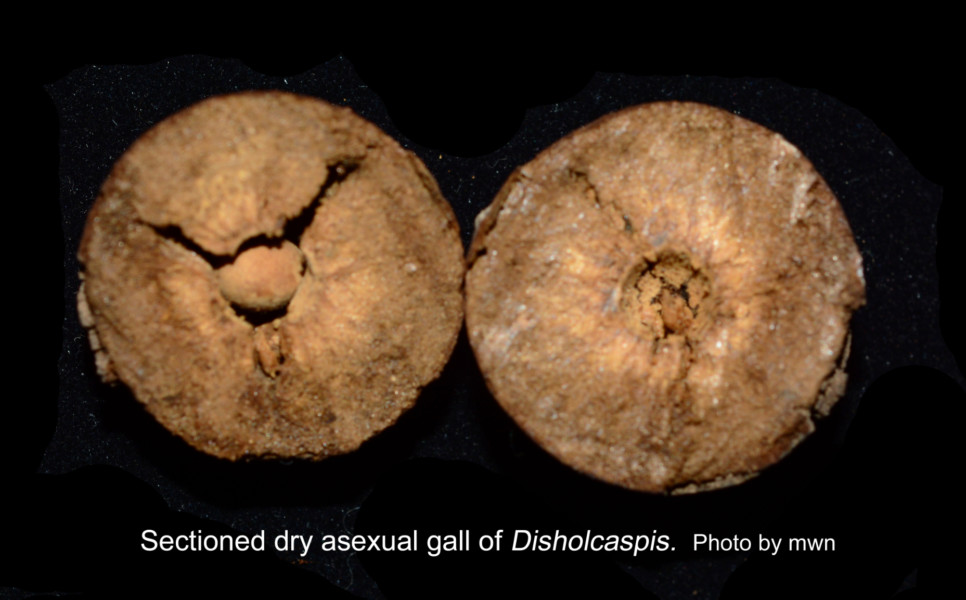