Monarch Butterflies (Danaus plexippus) are native to both North and South America, but by the 1800s their range had expanded throughout much of the world. Today, they are also found in the Caribbean, the Iberian Peninsula, Australia, New Zealand, Hawaii, and much of Oceania. It is not known exactly how they came about their present global distribution, but most likely wind and human assistance were involved.

Not all Monarchs migrate. The epic migration of the Monarch subspecies D. plexippus plexippus is a North American phenomenon. Every fall, populations of Monarchs west of the Rocky Mountains overwinter in sites along the coast of Central and Southern California; most of the populations east of the Rockies migrate to a few localities in the mountainous oyamel fir forests in the Mexican states of Michoacan and Mexico, arriving in November.

Monarchs emerging from their chrysalis in the late summer and early fall are in a physiologically unique state of arrested reproductive development called diapause. Under the control of the nervous and endocrine systems, Monarchs in diapause, sometimes called the “super-generation,” will live eight times longer than their reproductively mature predecessors. In addition to longevity, they also possess relatively large quantities of fat for the looming migration and winter survival. Environmental cues prompting diapause probably include decreasing daylength, cooler air temperature, and milkweed senescence (milkweed being the host plants for Monarch caterpillars). Migrating Monarchs are probably guided by the position of the sun, the Earth’s magnetic field, and the landscape to travel up to 50 miles per day using thermals and air currents to fly up to 3,000 miles to a destination they have never been.

Monarchs individually migrate, and not in flocks as many birds do, but while en route, form clusters in roosts of varying sizes at night. Most roosts last but a single night, but some may persist for a couple of weeks. Roost site-selection seems to be correlated with available wind shelter and a nearby food source. Monarchs migrating through Texas often roost in pecan trees. Migrating Monarchs need carbohydrates for their immediate energy needs. Pecan leaves often host aphids which will coat the leaf surface with sweet honeydew: Monarchs sip the honeydew from the leaf surface. (The accompanying photographs show Monarch roosts in pecan trees at a residence in Midland County).

The super-generation of Monarchs overwintering in Mexico will remain in their highland roosts until March and will not finish reproductive development until they begin their return northern migration. No individual butterfly completes a round trip, but during the northeastern migration, female Monarchs lay eggs on milkweed for subsequent generations. Four generations, each dispersing further to the north and east are involved in the annual migration cycle before another super-generation prepares to return south. 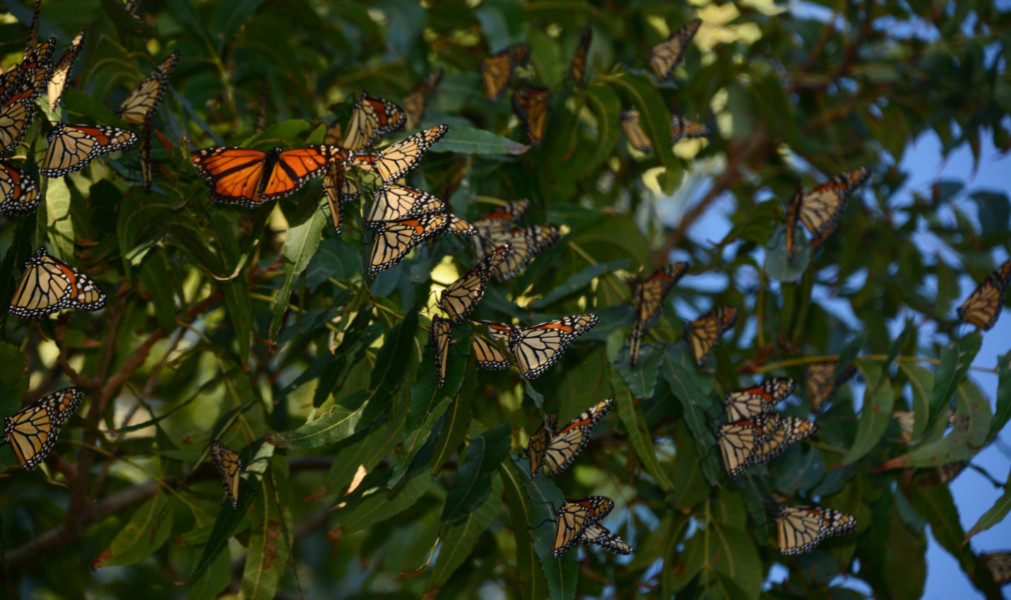 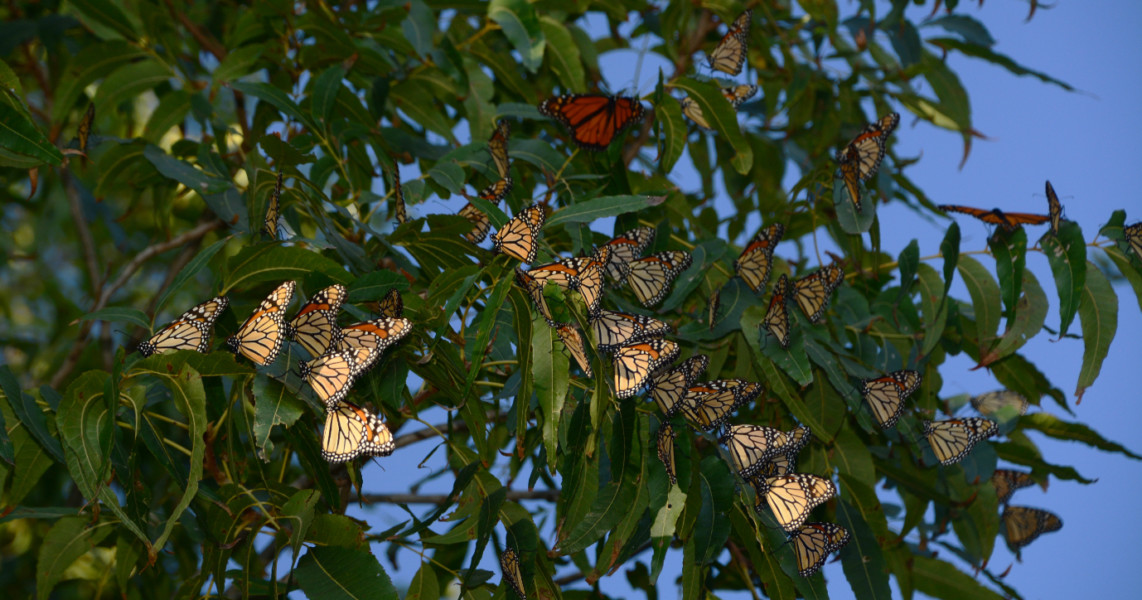 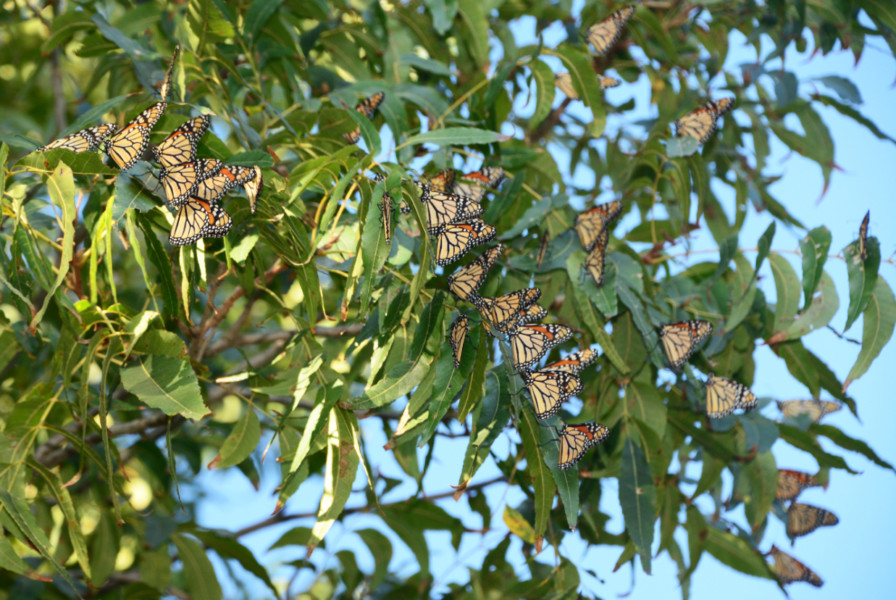 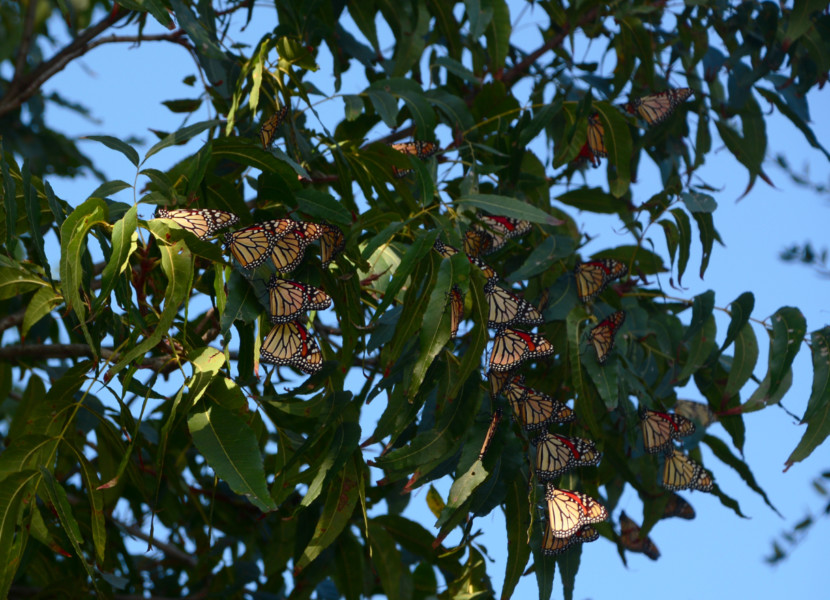 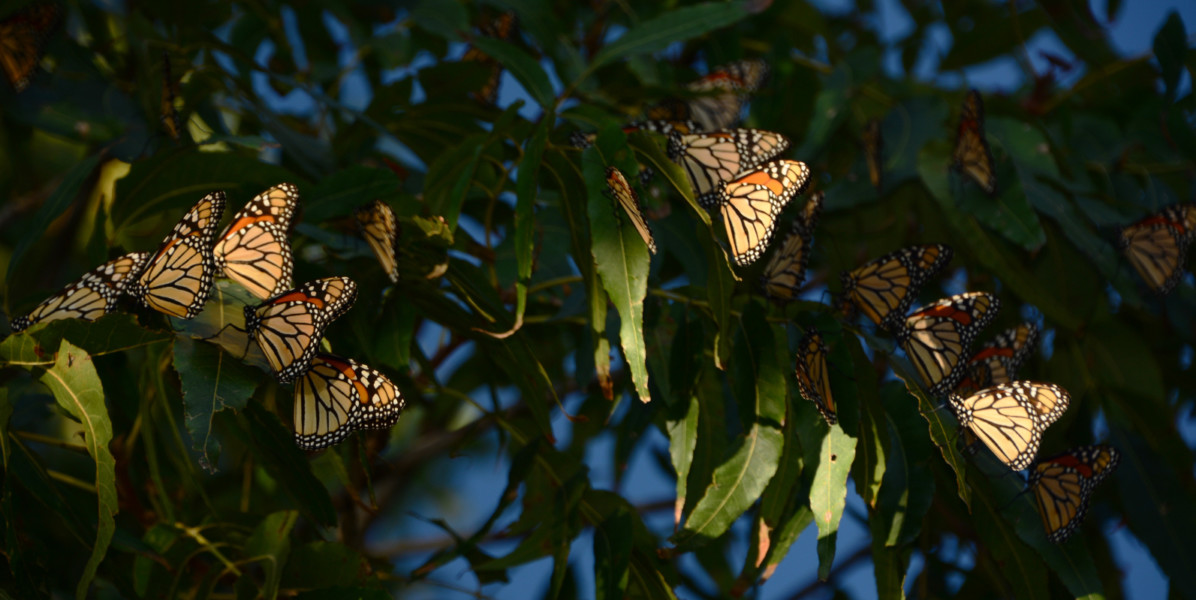