On any given day at Sibley Nature Center, I never know who will be walking through our door. Last August, my friend and colleague, Nathan Taylor of the I-20 Wildlife Preserve, introduced me to Dr. Claire Heinitz. (Dr. Heinitz found Nathan from a photo he had posted on iNaturalist). Dr. Heinitz was seeking permission to collect seeds of Parthenium confertum from Sibley Nature Center. P. confertum, commonly known as false ragweed or Gray’s feverfew is a common wildflower in the aster family at Sibley.

Dr. Heinitz is the Curator of the National Arid Land Plant Genetic Resource Unit (NALPGRU), a division of the United States Department of Agriculture-Agriculture Research Service (USDA-ARS). She has an interest in plants in the genus Parthenium of which a collection is managed at a facility in Parlier, California. Dr. Heinitz regenerates seeds through cloning and then evaluates and distributes them. Backup samples are sent to the Agricultural Genetic Resources Preservation Research Lab on the campus of Colorado State University in Fort Collins, Colorado; they in turn send backup samples to the Global Seed Vault on Spitsbergen Island in the Svalbard archipelago in Norway (5).

The goals of the research are off-site preservation, facilitating research and crop improvement, and the free distribution of seed samples to researchers around the world. The seed vaults preserve seeds in case of natural or man-made disasters. The original source of the P. confertum seed material from this acquisition will be acknowledged as from Sibley Nature Center in Midland, Texas in any subsequent publications. There will be no intellectual property restrictions, and the seeds cannot be patented by anyone in the form they were received (2).

But why the interest in the genus Parthenium? The California collection is important because it is the only source of seed outside the Chihuahuan Desert. P. confertum is a close relative to another species, Parthenium argentatum, or guayule---a flowering shrub native to the southwestern United States and northern Mexico. Guayule is important because it produces a latex that can be manufactured into natural rubber (8).

Latex is a milky fluid found in about 10% of all flowering plant species. Latex is a complex emulsion of proteins, carbohydrates, alkaloids, oils, tannins, resins, and gums that coagulate when exposed to air. Latex functions in plant defenses against herbivores and insects, exuding from plant tissues after an injury. The most important economic derivative from latex is natural rubber. More than 12,000 plant species yield latex containing rubber, but most species are unsuitable for commercial production (4). The discovery and production of rubber has an interesting history.

South Amerindians first discovered rubber about 3,600 years ago from the rubber tree Hevea brasiliensis (Family Euphorbiaceae) (3). An early use of latex came from another species of rubber tree, Castilla elastica (Family Moraceae) (1), native to tropical areas of Mexico, Central America, and northern South America. Mesoamerican peoples in pre-Columbian times used latex in the manufacture of rubber balls used to play the Mesoamerican ballgame. Even the name of the Olmec culture is derived from a word in the Nahuatl language translating as the “rubber people (7)”.

Christopher Columbus was one of the first Europeans to bring news of this odd substance (latex) back to Europe, but it was not until the discovery of the vulcanization process in 1839 which led to the practical uses for rubber spurring commercial demand. Initially, natural rubber could only be obtained in the Amazon Basin. Early attempts were made in 1873 to grow H. brasiliensis outside Brazil: twelve seedlings were sent to the Royal Botanic Gardens at Kew which were then sent to India for cultivation, but died; a second attempt was made in 1875 when 70 thousand seeds were smuggled to Kew, but only 4% germinated. In 1876, two thousand seedlings were sent to Ceylon and 22 to the Botanic Gardens in Singapore.

The Amazon Rubber Boom (1879-1912) was an important part of the economic and social history of Brazil and neighboring countries. The boom resulted in a large expansion of European colonization in the region, attracting an immigrant labor force, generating tremendous wealth for visionary entrepreneurs, growing cities, bringing transformations in culture and society, but wreaking havoc and destruction upon many indigenous societies.

Brazil had the world market cornered in the rubber trade, but the British brought rubber trees to Java in 1883, and a decade later, rubber plantations were established in Malaya with imported labor from China. Once established outside Brazil, rubber trees were extensively propagated in the British colonies of Southeast Asia. To stay competitive, Brazil needed a more efficient way of transporting latex to ports along the Atlantic Coast other than by river navigation. A railroad was in the planning since the 1870s, but construction did not begin until the early 20th century. The Madeira-Mamore’ Railroad was finally completed in 1912. Unfortunately, by the time of its completion, the price of latex had fallen precipitously on the world market. The British had planted rubber plantations in colonies throughout Southeast Asia and tropical Africa with greater efficiency and higher productivity with lower costs and lower prices. The British had undercut the Brazilian market, bring economic stagnation to Brazil. The British Empire now assumed dominance of the global rubber market. By the 1930s, American industrialist and business magnate, Henry Ford, experimented with a commercial rubber plantation in the Amazon, but the venture failed due to the South American Leaf Blight (SALB) ascomycete fungus, Microcyclus ulei (first reported epidemic in 1918) (6).

In 1915, the Bridgestone Corporation created the first tires made entirely of guayule rubber on an experimental farm and research center in Mesa, Arizona. It was in the 1920s that guayule saw a brief, but intense amount of agricultural research when the Intercontinental Rubber Company in California produced 1400 tons of rubber from guayule following the decimation of the Brazilian rubber industry.

A second Rubber Boom occurred between 1942-1945 caused by World War II. The Japanese Empire dominated the western Pacific and invaded Malaysia, wresting control of the rubber plantations from the British. The Allies lost access to 97% of the Asian rubber production. One solution was to take another look at the guayule plant back in the United States. Guayule again became a substitute for Hevea tree-produced latex during the war years. But the war ended before large-scale farming of guayule could get started, so the project was scrapped because it was still cheaper to import tree-derived latex than to crush shrubs for a smaller yield (9).

Today, most rubber tree plantations are still in South and Southeast Asia---Thailand, Indonesia, Malaysia, India, and Vietnam (2). Also, today, SALB may still be restricted to Central and South America, but the potential to be distributed around the world is a very real threat (6). Again, guayule is generating renewed interest due to its hypoallergenic properties of its latex over tree-derived latex. Guayule also has the potential to be a biofuel. Since guayule is not a food crop, it does not contribute to increase the cost of food crops, nor does it contribute to the world hunger problem as it can be grown where food crops would fail. The research interest has now been extended to the closely related Parthenium confertum found in the American Southwest, including Sibley Nature Center. 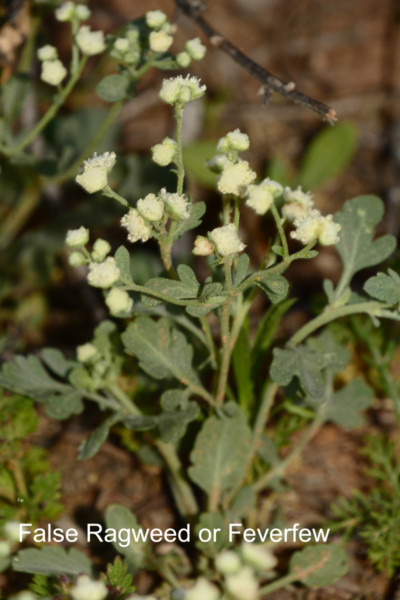 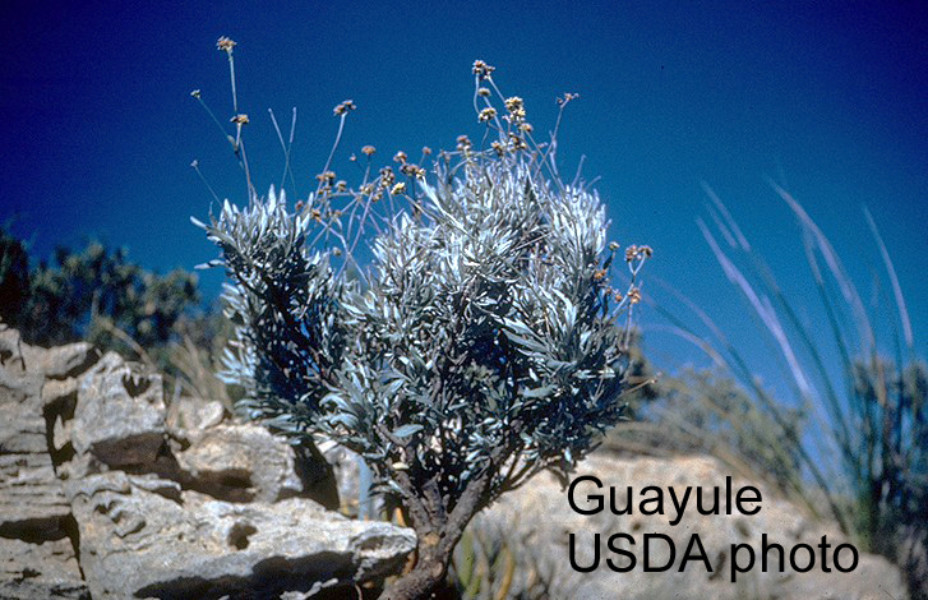