A pelican is a caricature of a bird---a large and heavy body, long wings, an enormous hooked bill with a distensible pouch, and all balanced atop extraordinarily short legs. As a child, I remember seeing a cartoon of a waddling pelican constantly tripping over his own pouch. American poet and humorist, Dixon Lanier Merritt, once penned a variation of his famous limerick…

A funny old bird is a pelican.

His beak can hold more than his belican.

Food for a week

He can hold in his beak,

But I don’t know how the helican.

Pelican-like birds date back to the Cretaceous Period of 100 Ma. The avian Order Pelecaniformes is an ancient lineage of birds including pelicans, cormorants, anhingas, frigatebirds, tropicbirds, boobies, and gannets. All members of the order have totipalmate feet, meaning all four toes are united by a web of skin. Fossilized pelican bones have been recovered from Oligocene deposits (30 - 40 Ma) from every continent they now inhabit. Other pelican fossils have been found in Pliocene deposits (2.8 Ma). Pleistocene deposits (2.58 Ma - 11.7 ka) commonly yield pelican bones from extant species.

The etymology of the word pelican is not clear. The ancient Greeks and Romans called the birds “pelicans” (or a version thereof) as have most European languages with an exception of archaic Spanish which refers to the birds as alcatraces (alcatraz sing.)---also the name of the infamous former federal prison on a rocky island in San Francisco Bay.

It was an ancient belief that pelicans fed their young with their own blood by puncturing themselves with their beaks. This belief came to be associated with Christ’s Passion, symbolizing piety and charity; thus, the pelican became a common motif in medieval heraldry.

Pelicans are superb birds. They are among the largest of extant flying birds measuring 4-6 ft. in length, a wingspan between 6.5-9 ft., and weighing 15-20 lbs. There is some truth to Merritt’s poem in that a pelican’s beak can hold 2-3 times the capacity of the stomach, but food is carried within the esophagus and never in their gular pouch. Pelicans are highly social and gregarious, living in flocks with young and adults of both sexes. Pelicans eat mostly non-commercial fishes and really do not compete with commercial and sport fisheries. There are two species of pelicans in North America: Pelecanus occidentalis, the Brown Pelican and

The American White Pelican is a very large white bird with black primary and outer secondary flight feathers. Breeding adults have a bright orange bill with a deciduous fibrous plate on the upper mandible that is lost after eggs are laid. Juveniles are white with a brownish wash on the head, neck, and lesser wing coverts; their soft parts are duller in color than the adult’s.

Due to a system of well-developed air sacs in the bones and under the skin, white pelicans are very buoyant, floating high in the water. Without the aid of wind, the white pelican must run over the water, pounding the surface with its feet while beating the wings. But when airborne, white pelicans have an amazingly graceful flight with heads pulled back resting on the shoulders, and alternately flapping and sailing with very slow wingbeats---often soaring to great heights on thermals. White pelicans may fly in lines or in orderly V-formations.

White pelicans consume fishes such as carp, chubs, shiners, perch, catfish, suckers, bass, sticklebacks, and jackfish; some salamanders and crayfish are also eaten. White pelicans do not aerial dive for food as brown pelicans do. Instead, white pelicans gather in groups forming a line or semicircle in shallow water, corralling and driving fish toward the shore as they dip their bills into the water while swimming---reaping the harvest from their cooperative efforts. In deeper water, white pelicans may forage alone or engage in kleptoparasitism, stealing from other pelicans, gulls, or cormorants.

American White Pelicans arrive in their breeding colonies on isolated islands in lakes of the inland American prairie from March-May with the largest colony at Chase Lake NWR in North Dakota. White pelicans are irregular migrants throughout Texas from March-June and again between July and November, often observed in flocks. They winter mainly from central California and the Gulf states to southern Mexico and as far south as Guatemala on coastal bays and estuaries and large inland lakes. There is, however, a small resident population at Laguna Madre on the Texas Coast. Non-breeding birds may spend summers well outside their normal breeding range.

White pelicans are ground nesters, usually in areas free of vegetation. Breeding behavior is closely synchronized within a colony. Two white eggs are normally laid, but usually only one chick is successfully raised. Adult pelicans are generally too large for predators other than coyotes; however, gulls and ravens prey on the eggs and nestlings. Young pelicans also fall prey to foxes, great horned owls, red-tailed hawks, bald eagles, and golden eagles. The siblings compete, but the older and more aggressive gets most of the food while the younger starves. Young pelicans insert their bills down the throats of the parents to be fed parts of pre-digested fish. Both parents will incubate and feed the young for about a month, often flying over 150 miles in search of food. Young pelicans leave the nest between 21 and 28 days after hatching, gathering into a group called a creche or a pod where they will remain for about another month. They take their first flight at around 60 days after hatching. Parents will care for their offspring for about three more weeks until the family bond disintegrates. A fledgling pelican is about 20% larger than its parents because of a stored fat reserve that will see it through the days of learning how to catch fish for itself. Pelicans will gather into large groups on productive feeding grounds in preparation for fall migration to their winter ranges usually by September. 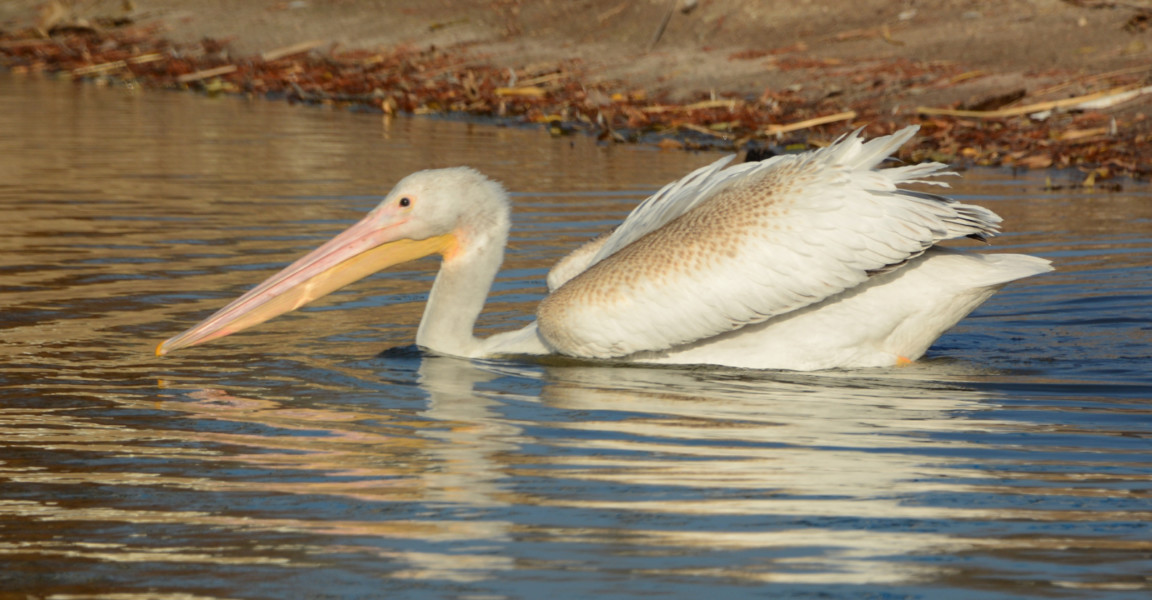 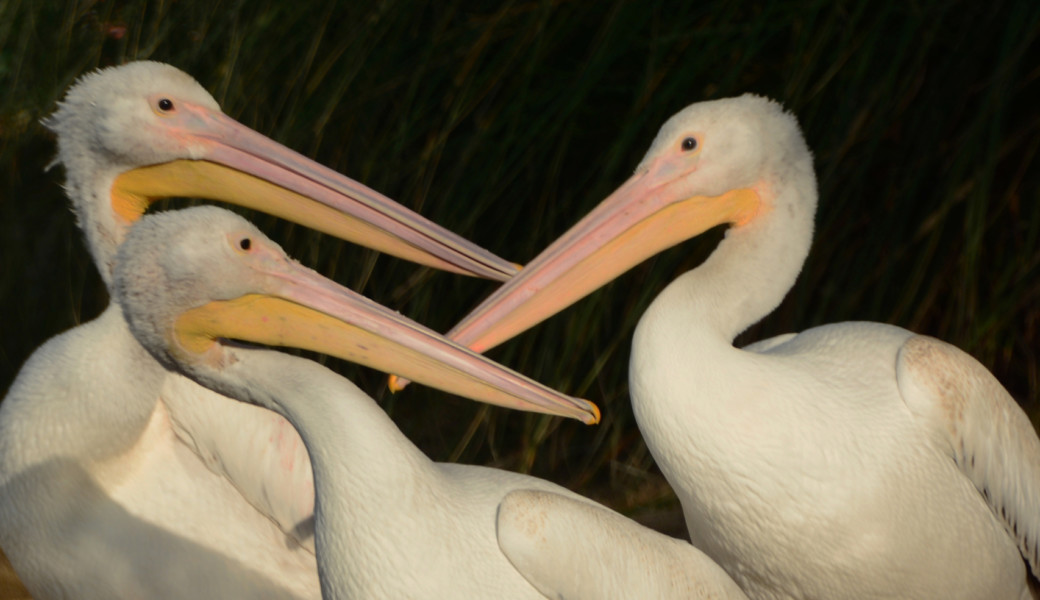 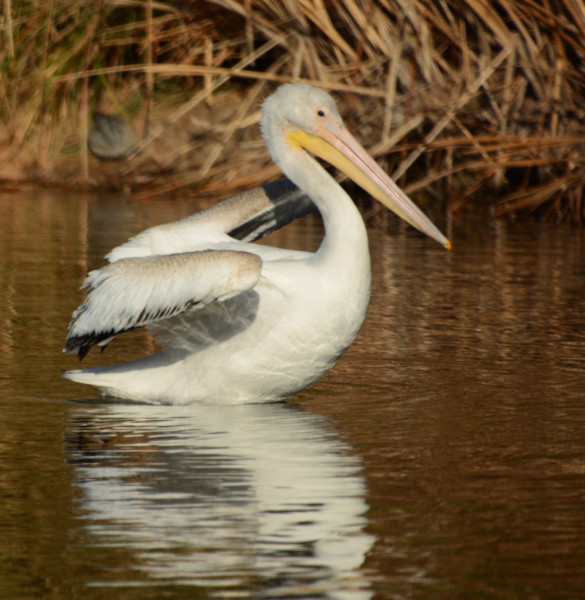 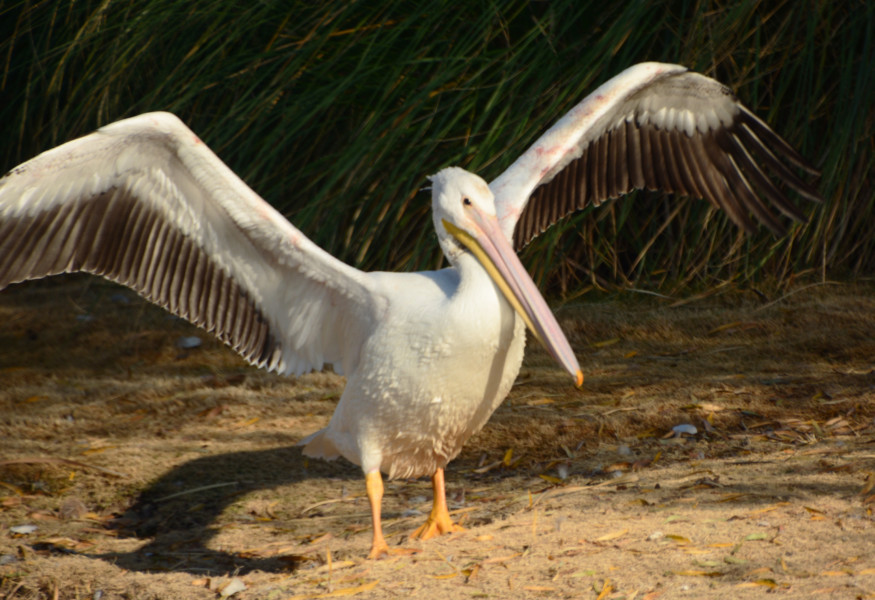