The mesquite twig girdler (Oncideres rhodosticta) is a species of beetle in the Family Cerambycidae (commonly referred to as "long-horned beetles" because of their exceptionally long antennae). O. rhodosticta is a small beetle between ½ and ¾ inch long. The body is a dark brown with a broad gray band across the leathery outer wings called the elytra. The elytra are densely spotted with pink or orange spots. One distinguishing feature of the mesquite twig girdler is the presence of three shiny black dots on the prothorax, the section of thorax immediately behind the head.

Adult twig girdlers are more often seen under street lights at night than on trees. The adults appear from August through October for mating. After mating, females select a twig from a mesquite, or other closely related tree, and chew a ring around the circumference of the twig. Girdling the twig severs the flow of sap and water from the twig resulting in the death of the twig. She will then lay her eggs in the dead twig which will hatch within one to two weeks. After hatching, the beetle larvae tunnel beneath the bark of the dead twig, feeding and undergoing several molts until the following summer when they transform into the pupal stage. Some individual beetles, however, do not complete their development until May or June the following year. Although the activities of the mesquite twig girdler result in the death of a few twigs, the tree is otherwise little harmed---merely pruned for more new twig growth.

The mesquite twig girdler is found in the southwestern United States from Texas to Arizona, northern Mexico into Baja California. Specifically in Texas it is found on the Llano Estacado, Southern Rolling Plains, and the Trans-Pecos. 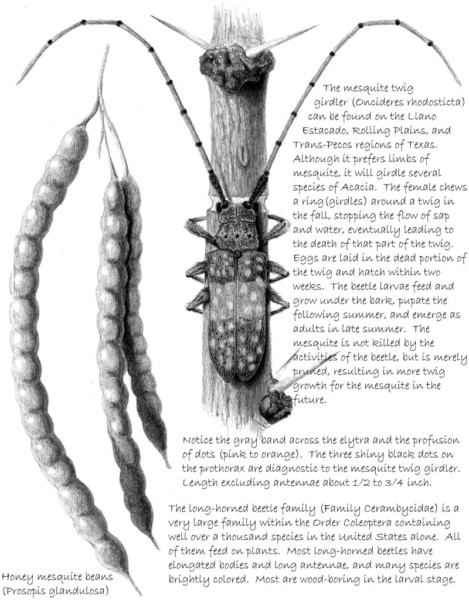